fxhash, the Tezos-Based Generative Art Platform, is featured in the NFT Project Spotlight. fxhash aims to make creating and collecting generative art more accessible for everyone. 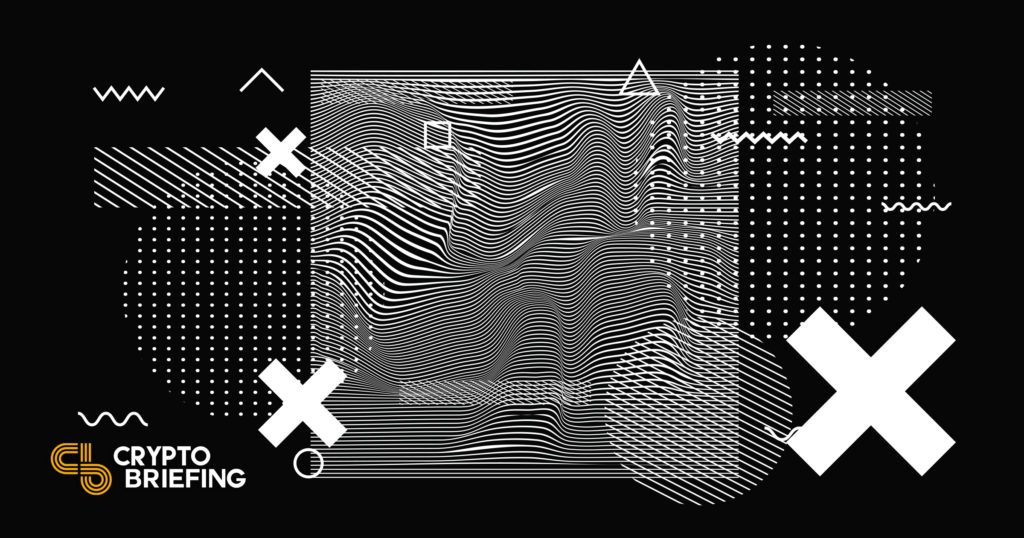 fxhash is a generative art marketplace and platform on the Tezos blockchain that lets anyone to upload their code and generate outputs as Tezos NFTs. Crypto Briefing caught up with fxhash team member Paul Schmidt to talk about the platform’s explosive growth and future ambitions.

Launched in November 2021, fxhash is a generative art platform that lets anyone upload their code to the site and mint the outputs as Tezos NFTs. Although it takes some coding knowledge to start creating art on fxhash, the platform’s community is dedicated to helping new users get to grips with the emerging and often complex art form.

Paul Schmidt, one of 10 core fxhash team members, recently sat down with Crypto Briefing to guide us through how generative art is created and how it intersects with NFTs and blockchain technology. “Basically, artists upload their code on our platform, that code has some randomness attached to it, and this randomness gets seeded by a transaction hash,” Schmidt explained, before outlining the process in more detail.

First, an artist writes code (usually in HTML, CSS, or JavaScript) that produces an output as a piece of static or animated art. There are usually several aspects of randomness within the code that can visually alter its outputs within a defined range. On fxhash, the Tezos transaction hash generated when a user mints an iteration of a generative art piece is what determines that randomness. This way, each NFT minted is verifiably unique and cannot be replicated.

The fxhash platform is the brainchild of generative artist Ciphrd. He drew from his background in computer science to build the site and used his experience creating generative art to implement the necessary tooling to help budding artists to bring their work to life.

Because fxhash provides support for both experienced coders and those who are just starting out, it has become a hub for generative artists and collectors of all backgrounds and skill levels. fxhash team members provide guides and resources to help newer artists, while experienced coders can connect with other artists to share ideas and information through the project’s Discord server.

Despite starting as a one-man show, interest in fxhash quickly grew, and Ciphrd realized he would need additional help managing the platform. He contacted several of fxhash’s most active community members to help work on the project full time. Schmidt, who was one of these early recruits, said that the project has stayed true to its initial principles because many of its developers came from its early community. This has created an open platform that puts art and technology first.

Although fxhash has become the leading generative art platform on Tezos, it is not the first one to make it big in the crypto space. In November 2020, the Ethereum-based platform Art Blocks was primarily responsible for bringing generative art into the crypto mainstream through a series of curated mints. The platform’s first curated collection, Genesis by DCA, minted out on Nov. 27.

In the months that followed, Art Blocks pieces soared in popularity, helping propel generative art into the limelight of the Ethereum NFT boom. Since then, prominent generative artists such as Fidenza creator Tyler Hobbs and Ringers artist Dmitri Cherniak have become widely recognized among NFT and fine art collectors. Fidenza and Ringers NFTs regularly command six-figure sums on secondary marketplaces such as OpenSea.

As Art Blocks is best known for showcasing high-profile generative artists through its curated collections, it hasn’t been as focused on supporting the growing number of new entrants attempting to engage with the medium for the first time. Here, fxhash saw a gap in the market and an opportunity to help grow the generative art movement as a whole. According to Schmidt, fxhash was set up to help those interested in the art form connect with other generative artists and experiment with the medium. “Ciphrd wanted to build an open platform where everybody could learn about generative art and upload their projects,” said Schmidt, noting how one of fxhash’s initial goals was to make generative art more accessible for everyone.

fxhash’s decision to launch on Tezos was also vital to making generative art more approachable. Since NFTs first went mainstream in early 2021, most project launches and NFT trades have occurred on Ethereum. As the biggest and most widely recognized blockchain with smart contract capability, it made sense for artists to go where they could find the most exposure; however, with increased usage also came increased gas fees due to Ethereum’s limited block space.

At the peak of NFT mania in the summer of 2021, gas fees for minting art on Ethereum would regularly set users back hundreds of dollars. When new generative art runs dropped on Art Blocks, competition for the limited number of mints pushed prices even higher as collectors and NFT flippers bid up their transactions to get them processed first. While Schmidt is a fan of Art Blocks and everything the platform has done for the generative art scene, he also levied some harsh criticism against the blockchain it runs on, noting that “on Ethereum a lot of gas has been burned, and it’s not the way a blockchain should be run.”

The fxhash team recognized that the cost of minting generative art on Ethereum posed a significant barrier to entry and instead looked for alternative ecosystems offering cheaper fees and lower energy consumption. When asked why fxhash chose to launch on Tezos over other low-fee blockchains such as Solana and Avalanche, Schmidt pointed to the Tezos art community. “The art scene has been growing on Tezos; it all started with Hic et Nunc back in 2021, and there have been a few other platforms as well.”

Additionally, Schmidt pointed out that Tezos is one of the few Layer 1 blockchains that is not propped up by venture capital money. “There’s not too much power aggregated into a few people or entities,” he explained, praising Tezos’ commitment to decentralization. Both Ethereum and Tezos sold the vast majority of their native tokens through a public sale, and for Tezos specifically, only around 10% are currently owned by insiders. On the other hand, almost half of all Solana and Avalanche’s native tokens are held by their founding teams, venture capital firms, and other private entities.

Like many other NFT art projects in the crypto space, fostering an engaged and active community has been integral to fxhash’s success. When asked about what the team had done to help build fxhash’s community, Schmidt attributed a lot of the platform’s success to the large number of artists and developers who form a tight-knit group of core users. “Much of the early community cares more about the art than prices,” said Schmidt, while detailing how the fxhash team has worked to instil a positive mentality within the project’s Discord community by actively engaging with members and embodying fxhash’s core values.

In this way, fxhash has focused on maintaining slow and steady growth and avoided the platform becoming a playground for NFT flippers and speculative investors. Schmidt shared his thoughts on how the success of Art Blocks has become a double-edged sword for the platform, stating:

“One of the things that happened at Art Blocks was this exponential growth in the summer of last year, and I talked with Art Blocks founder Erick Calderon, and he said, if you could have wished for it, that he didn’t want that to happen. The exponential growth sets a really bad precedent for new people coming in—they buy pieces expecting the price to go up but it might deteriorate in value. This was something we really wanted to avoid.”

Schmidt thinks that fxhash avoids the problem of new entrants setting their expectations too high because the platform doesn’t curate its launches like Art Blocks does. “On fxhash there’s no central committee deciding what is good and what is not—the market and our community decides what is uploaded and what is good,” he explained.

Despite focusing on more sustainable and organic paths to growing the platform, fxhash has some ambitious expansion plans. In the same spirit as the platform was founded on, the team is constantly engaging with the community to find out what new features users want to see. This has led to the development of a new fxhash initiative: curated spaces.

The new curated spaces will allow fxhash users to create their own galleries to showcase generative work from multiple artists in a single digital exhibition. fxhash also intends to implement articles, meaning third-party media will easily be able to reference fxhash content. Galleries and articles will be represented as their own NFT tokens on the Tezos blockchain and allow users to curate work within the fxhash ecosystem while also making it much easier to return value to content creators for their work.

The fxhash team hopes that this new functionality will offer new routes for both artists and collectors to monetize their contributions to the fxhash ecosystem. For example, suppose a user discovers someone’s generative art through a gallery or curated space and either mints it or purchases it on the secondary market. In that case, the gallery’s creator could receive a small percentage of the fxhash platform fees or even part of the artist’s commission. All the new curated space features will be implemented through smart contracts, ensuring that the fxhash platform remains as decentralized and robust as possible.

For now, fxhash will continue developing and growing its community as it has always done—although keeping a low profile is becoming increasingly difficult. Generative art projects from crypto celebrities such as PROOF Collective’s Ryan Bell have attracted a lot of attention from the wider NFT community, and pieces from fxhash’s most coveted projects regularly sell for thousands of dollars today.

Quality projects from lesser-known artists are also gaining a lot of traction. Schmidt recommends browsing around the site to see the full extent and variety of the platform’s artistic talent: “There are so many talented artists it’s hard to pin down to a single one. I encourage everyone just to click around and see what entices them.”

Whether fxhash can eventually match rival generative art platforms such as Art Blocks is still up in the air, but it seems clear that both artists and collectors are receptive to the platform’s unique and open approach. Overall, the success of fxhash signals a deep and growing appreciation for generative NFTs. The platform’s rapid growth signals that the nascent art form is here to stay.

Disclosure: At the time of writing this feature, the author owned ETH, XTZ and several other cryptocurrencies. He also owned a piece of generative art minted through fxhash.