As the price of Ethereum falls, open interest in the currency skyrockets. 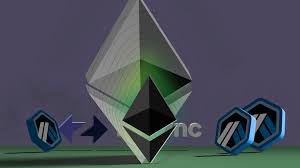 Ethereum has seen more interest in recent days. Most of it has come from the price decline of the digital asset which has allowed investors to get in at a much lower price. This interest can be easily seen in the rise of the Ethereum-denominated open interest. In the last week, this has risen dramatically. Mostly, it has been managing funds that have been at the forefront of this increase.

For the better part of the past month, the Ethereum open interest has been on a slow climb. This trend would continue through the end of May but the first half of June would paint a different picture. This is where the ETH-denominated open interest takes a turn for the better.

Open interest in Ethereum futures had risen quickly from 2.4 million ETH to 3.3 million ETH last weekend alone. It represented one of the largest increases in open interest in the space of three days. It is speculated that this dramatic increase emerged from funds looking to take advantage of the opportunity provided in the stETH and ETH peg. Most of the investors were actually on the lookout to short ETH futures, which would in turn provide cover for stETH exposure. A reasonable move.

However, the rise in open interest would not last. Coming out of the end of the weekend saw a significant plunge in the Ethereum-denominated open interest which had risen before. It lost about 400,000 ETH in the space of a day which brought open interest back down to 2.9 million. Albeit a higher low.

Short traders were forecasted to be the most active during this time given the performance of ETH funding rates. While open interest had soared, funding rates had declined below neutral and into the negative. Mostly stemming from all of the hedging activities that were going on.

Ethereum’s dominance over the crypto market had been on the rise in the last couple of months. However, holding this would prove to be a much harder feat given the decline that had been experienced since then. Bitcoin had begun to eat quickly into the market share and this had seen that of altcoins such as Ethereum drop.

ETH had started the year with a dominance high of 21.50%. But has been unable to recover to this point since then. It has since lost more than 6% of its market dominance, which leaves it at its current position of 14.95%.

This is in line with the decline recorded in the price, losing more than 40% of its value in just this week alone. However, it continues to maintain its lead as the second-largest cryptocurrency in the space.